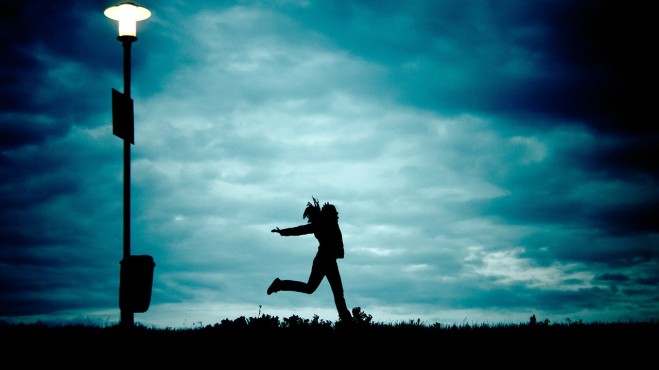 There among the hills she met a warrior, whose duty it was to guard

We camped that night at the foot of the hills we had been approaching for two days and which marked the southern boundary of this particular sea. Our animals had been two days without drink, nor had they had water for nearly two months, not since shortly after leaving Thark; but, as Tars Tarkas explained to me, they require but little and can live almost indefinitely upon the moss which covers Barsoom, and which, he told me, holds in its tiny stems sufficient moisture to meet the limited demands of the animals.

After partaking of my evening meal of cheese-like food and vegetable milk I sought out Sola, whom I found working by the light of a torch upon some of Tars Tarkas’ trappings. She looked up at my approach, her face lighting with pleasure and with welcome.

“I am glad you came,” she said; “Dejah Thoris sleeps and I am lonely. Mine own people do not care for me, John Carter; I am too unlike them. It is a sad fate, since I must live my life amongst them, and I often wish that I were a true green Martian woman, without love and without hope; but I have known love and so I am lost.

“I promised to tell you my story, or rather the story of my parents. From what I have learned of you and the ways of your people I am sure that the tale will not seem strange to you, but among green Martians it has no parallel within the memory of the oldest living Thark, nor do our legends hold many similar tales.

“My mother was rather small, in fact too small to be allowed the responsibilities of maternity, as our chieftains breed principally for size. She was also less cold and cruel than most green Martian women, and caring little for their society, she often roamed the deserted avenues of Thark alone, or went and sat among the wild flowers that deck the nearby hills, thinking thoughts and wishing wishes which I believe I alone among Tharkian women today may understand, for am I not the child of my mother?

“And there among the hills she met a young warrior, whose duty it was to guard the feeding zitidars and thoats and see that they roamed not beyond the hills. They spoke at first only of such things as interest a community of Tharks, but gradually, as they came to meet more often, and, as was now quite evident to both, no longer by chance, they talked about themselves, their likes, their ambitions and their hopes. She trusted him and told him of the awful repugnance she felt for the cruelties of their kind, for the hideous, loveless lives they must ever lead, and then she waited for the storm of denunciation to break from his cold, hard lips; but instead he took her in his arms and kissed her.

“They kept their love a secret for six long years. She, my mother, was of the retinue of the great Tal Hajus, while her lover was a simple warrior, wearing only his own metal. Had their defection from the traditions of the Tharks been discovered both would have paid the penalty in the great arena before Tal Hajus and the assembled hordes.

“The egg from which I came was hidden beneath a great glass vessel upon the highest and most inaccessible of the partially ruined towers of ancient Thark. Once each year my mother visited it for the five long years it lay there in the process of incubation. She dared not come oftener, for in the mighty guilt of her conscience she feared that her every move was watched. During this period my father gained great distinction as a warrior and had taken the metal from several chieftains. His love for my mother had never diminished, and his own ambition in life was to reach a point where he might wrest the metal from Tal Hajus himself, and thus, as ruler of the Tharks, be free to claim her as his own, as well as, by the might of his power, protect the child which otherwise would be quickly dispatched should the truth become known.

“It was a wild dream, that of wresting the metal from Tal Hajus in five short years, but his advance was rapid, and he soon stood high in the councils of Thark. But one day the chance was lost forever, in so far as it could come in time to save his loved ones, for he was ordered away upon a long expedition to the ice-clad south, to make war upon the natives there and despoil them of their furs, for such is the manner of the green Barsoomian; he does not labor for what he can wrest in battle from others.